Working abroad has been a wish of mine for some time now. Xebia offers me the opportunity to live and work in India. Through this blog series I will keep you informed of the progress and challenges of this project.
The next step in the process is packing your bags and… GO! 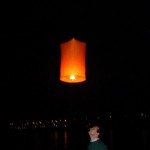 Before you can actually leave, you have to make sure that you have a fantastic farewell party to share with your family and friends. Ours was in a nice little bar in Nijmegen, the people there helped us brilliantly to organize this party. I can definitely recommend that location. We shared the evening with a pleasant mix of family, friends an colleagues. It was truly a very good way to say ‘goodbye’. One of the moments that will forever color my memory of that evening was the ‘lift-off’ of our own ‘hot-air balloon for luck’. Some friends of mine had found this extraordinary gift and we launched it in the center of Nijmegen. At some point it seemed that the balloon would actually crash into one of the multi-level apartment buildings, but lucky it got enough height and floated away in the night sky. It disappeared high over Nijmegen, never to be seen again. I still wonder where it ever landed…
Expat course
In the week before we left, we attended an expat-course. This is a personal training that is adapted for the country that you are leaving for. We had two days, crammed with interesting material on Indian culture. The main part of the training was conducted by two Indian ladies, that live temporarily in the Netherlands. Both had a lot of experience in living abroad and were able to both tell us about what it is like to live abroad and give us some insight in the Indian culture. Does and Donts are always important, although I’m quite sure I still make an offensive mistake from time to time.
Surprisingly, one of the interesting topics was… on Dutch culture! The host of the training, started of the training with one hour on typical Dutch ‘Waarden en Normen’ (personal and cultural values). Apparently the most prominent Dutch values are:

Historically these are rooted in our different backgrounds: Calvisnism, Control over water, Republican past, Trade and Prosperity. To me this was a rather interesting summary of Dutch culture. I wonder if this makes any sense to a foreigner visiting the Netherlands. If not, they also provide ‘Understanding the Dutch’ trainings, that are obviously very hilarious…
Getting your stuff to India
Now, when you finally move, you will have to bring some of your stuff to India. How does that work? Back home, you put all the stuff you want to take in boxes and one fine day these boxes are collected by a transport company. The next time you see the boxes, they are in a big hangar at the International airport of Delhi.
The hangar is split in two by a big fence, behind which towers mysterious boxes are stored. Through the two gates in the fence small forklifts are driving back and forth, sometimes with a box sometimes it seems just to pass the time. In front of the fence, there is some sort of low desk. On and around the desk are numerous boxes, bulging with personal belongings. Here in between dozens of people swarm: Cargo Agents, who are accustomed to the hassle and stroll around with a knowing smile; Owners of the stuff, who nervously try to attract the attention of anyone who looks somewhat formal; Workers, who eagerly attack the boxes with hammers and chisels and search any taxable devices between the worthless clothes, books and other trash; And two customs officials, who pompously parade from here to there with papers in hand.
From a bench on the side I’m watching the spectacle. There is no system. There are several piles of boxes in several stages of the process. A big pile of boxes has been checked for 50 percent, but the rest has been left to lie idle. Somewhere a family is rigorously trying to open the lock on their last suitcase. One of the customs officials is sitting at a desk to enter their decisions about taxes to be payed into the system. He is beleaguered by a crowd of people that are trying to get the decision of his customs colleague approved. The other one is walking aimlessly between the piles of boxes, sometimes rummaging through some personal belongings or shouting at the work men to work faster. Everybody is trying to attract him to his own pile of boxes. At one point he bashes the owner of a huge number of boxes that are being scrutinized: The bozes contain all sorts of bags and merchandise. What is not clear to me, but the owner has done something wrong. He is smiling sheepishly.
The chest with my boxes is standing behind the desk. One of the workmen has opened one corner, but was sent off by one of the officials to do some other job. The chest has been standing there like this for more than one hour. Finally my Cargo Agent succeeds in bringing the customs official to “inspect” my stuff. The boxes are being dragged from the chest and mercilessly cut open. “Big electronic equipment?” the official asks me. The only such things I brought are kitchen appliances: a mixer, a blender and a bread baking machine. And a small sound system. I try to direct his attention to the bread baking machine, because that is the largest device. With an impatient gesture he moves on to the next group of nervous people. All in all it took less than five minutes.
This is IST: Indian Stretchable Time. Everything takes time in India, but how much is always hard to predict. An official procedure like this might take anywhere between 5 minutes and a full day. The waiting usually takes up most of the time…
Living in India is a new adventure everyday. I’ll try to relate some stories in the blogs to come.

Welcome to India and hope you have a pleasant stay!

I think not much has changed at the customs since I wrote my blog on customs when I returned to India in 2006. http://axvia.blogspot.com/2006_06_01_archive.html

Nice post. Thank you for the info. Keep it up.