“Well eh ok, I guess so” mumbled the student in the product owner training exercise where he was practicing how to say no to feature gluttony. I decided to give the class an additional exercise to awaken their inner diplomat.

“Diplomacy is the art of telling people to go to hell in such a way that they ask for directions.” – W.S. Churchill

All sweet and well, but how do we say NO?
Verbal Aikido
The Agile Chef conference was an immersive experience for product owners, product managers and agile coaches, in which we focussed on letting people really feel what is meant by (agile) behaviour.
One of the workshops that I conducted was about verbal aikido. In this workshop we took off our shoes and stepped on the mat to experience what I consider the three core principles of aikido:

Presence
Product managers live and breathe communication. It’s all about getting your point across and making sure the team and stakeholders are rallied behind the vision. Inevitably you will run into people that disagree, some in stronger positions than yourself.
What is important to remember is that communication has little to do with the message we are trying to convey. Actually 7% of what reaches your audience are the words, 38% is THE TONE OF VOICE (see, that caught your attention) but a stunning 55% of communication is body language!
In all martial arts there is a strong emphasis on kime. It translates loosely to “power” and/or “focus,” describing the instantaneous tensing at the correct moment during a technique. In all cases, certain finality is implied. 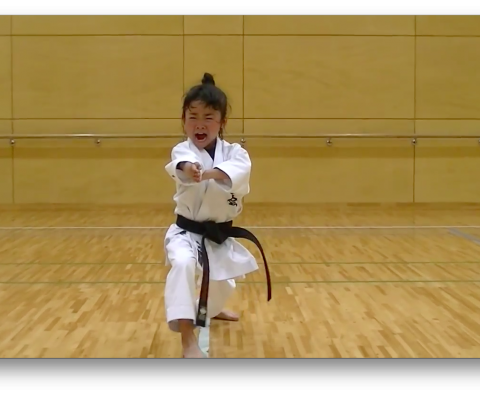 Mahiro (7 years) is practicing her kime

I’m happy to say that my student that I mentioned in the beginning of this article has changed is kime and people become aware of his view on the product vision because of this. The best (and most painful way) is to video tape yourself and analyse the following 6 traits:

Harmony
When sparring either verbally or in real life, there are 3 dimensions in which you can move. 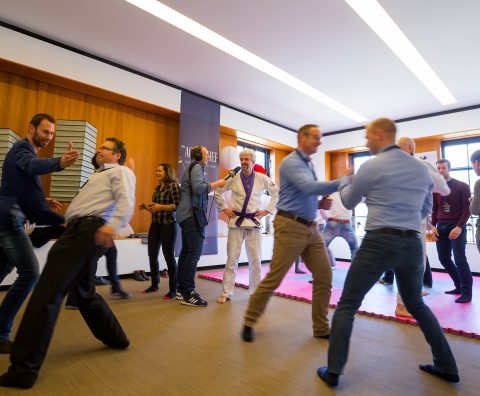 Let’s dive a little deeper in what this means in the verbal world of the product manager. The rule you should follow can be memorised in a second: SEC. Which means: Soothe Emotion, Correct content.
Have you ever been in a meeting where the stakeholder looks you in the eye and says: “That’s just way too expensive! we won’t go for that”? You could go in fully armed and exclaim something along the lines of: “But you will get a better solution!” or weasel out backwards and forget about it, or you can apply a verbal tai sabaki. People expect a forward or backward move, not a sideways one, use their surprise to get them off balance.
When you reply something along the lines of: “I totally get that, I was stupefied by it myself” you will catch them off guard. And while they are still puzzling what just happend you can explain what the cost structure is or why you chose to implement things in a certain way.

“People don’t listen because they want to hear what you have to say, they listen so they can reply.”

I like to make analogies, it pulls the person into your world and that makes it easier to get your point across. When debating the number of interviews with potential customers that we would have to do for a new product discovery in France, I totally agreed that the number of interviews was quite high. I then compared it to the wonderful breakfast I enjoyed. It was particularly good because I had used the butter on only a single slice of bread rather than applying it to an entire loaf. It’s the same with discovery interviews, if you use only a handful to cover all of your persona’s, countries and products, the result is going to feel like butter spread across too many slices. 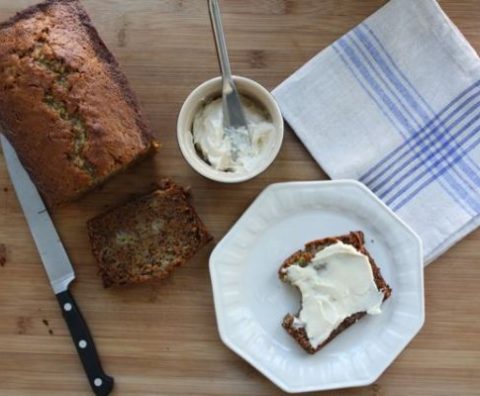 So first, soothe their emotion, then correct them on their content. Forgetting to soothe their emotion will make it impossible to correct the content.
Leading
Aikido is cool because it strives to end the conflict, but it does so by leading the opponent to a favourable outcome. What technique can we apply to verbally lead our opponent to a different outcome?
There are two distinct phases in verbal aikido. In the first phase your opponent is not convinced of your proposal and is moving away from the desired outcome. As with aikido, we let them go and even propel them in their direction. We do this by feeding the doubt of his decision, but rather than firing arguments at them, we let them do that themselves.

“Are there problems do you foresee with this approach?”

Rather than having to respond and shoot down every argument you throw at them, they now enter the realm of doubt and create uncertainty around their preferred outcome. This will allow you to get a grip on your opponent. 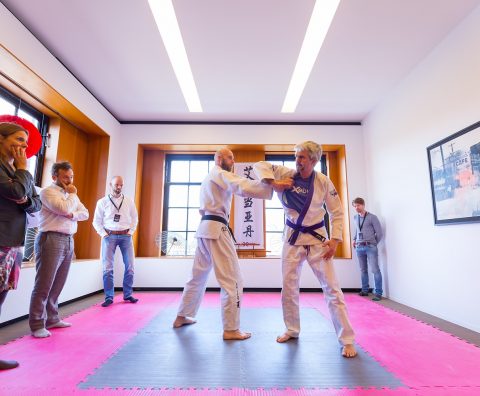 The Secret of Leading Is in the Grip

The second stage happens when they start moving towards your desired outcome, now we apply the same technique but in reverse (gyaku é€”).

“What additional benefits do you see to this approach?”

Now your opponent starts making your case! and if you play it right comes autonomously to the conclusion that your approach is the best. And that is exactly what Churchill meant.
Epilogue
“But Chris, this all sounds like sales techniques, not product management techniques” asked one of the students. The irony is that he was both right and wrong. Yes, the approach is rooted in sales techniques, but a key ability of product managers is the ability to sell your product (at least internally).

The blog seems to be very enlightening. May I know how can i follow/subscribe to this blog pls??