The Legend of the 5 Monkeys, the Doctor and the Rose

As Product Managers people look up to us to carry the vision, to make sure all the noses are aligned, the troops are rallied and that sort of stuff. But what is it that influences behavior? And what makes your team do what they do? The answer has more to do with you than with others.

The legend of the 5 monkeys: [insert kudo button for obscure movie references here]

A group of psychologists performed an experiment years ago. They started with a cage containing five monkeys. Inside the cage, they hung a banana on a string with a set of stairs placed under it. Before long, a monkey went to the stairs and started to climb towards the banana. As soon as he started up the stairs, the psychologists sprayed all of the other monkeys with ice-cold water. After a while, another monkey made an attempt to obtain the banana. As soon as his foot touched the stairs, all of the other monkeys were sprayed with ice-cold water. It wasn’t long before all of the other monkeys would physically prevent any monkey from climbing the stairs.
Now, the psychologists shut off the cold water, removed one monkey from the cage and replaced it with a new one. The new monkey saw the banana and started to climb the stairs. To his surprise and horror, all of the other monkeys attacked him. After another attempt and attack, he discovered that if he tried to climb the stairs, he would be assaulted. Next, they removed another of the original five monkeys and replaced it with a new one. The newcomer went to the stairs and was attacked. The previous newcomer took part in the punishment with enthusiasm! Likewise, they replaced a third original monkey with a new one, then a fourth, then the fifth.
Every time the newest monkey tried to climb the stairs, he was attacked. The monkeys had no idea why they were not permitted to climb the stairs or why they were beating any monkey that tried. After replacing all the original monkeys, none of the remaining monkeys had ever been sprayed with cold water. Nevertheless, no monkey ever again approached the stairs to try for the banana. Why not? Because as far as they know that’s the way it’s always been around here.

It’s a great story! it sounds so familiar, we can all relate to one or more situations at the office where things didn’t make sense but are just “how we do things around here.” It appeals to us and makes us remember that we need to constantly refine and retrospect on our product and the process to create our product.
The story of the five monkeys and the ladder originates from the 1996 book Competing For The Future by Gary Hamel and C. K. Prahalad. It’s was meant as an anecdote and not a scientific report. If it were, it would be debunked pretty quickly, since it is not what monkeys do.
Internet forum Throwcase dug up an article by G.R. Stephenson called Cultural Acquisition Of A Specific Learned Response Among Rhesus Monkeys (1966). Which, with some different parameters, shows that the newcomer will most likely teach the others no longer to fear the old. There is also a gender issue, female monkeys learn by observation, male by “punishment.” Not sure if that transfers to humans, though dancing lessons with my wife seem to totally validate it.
As Product Samurai it is hard for me to adhere to a rule I do not understand. All Budo sports are based on true understanding of the technique it is not enough that everybody does it in this way; it must make sense to me. Before I can absorb or adapt it, we must first understand.

When taking over a midrange sedan product from his predecessor an eager young product manager went over all the specs to see if there is something where he could optimize the production and supply chain of his product.
After many days something in the specs caught his attention: the front windshield was designed and manufactured to withstand speeds up to 300 km/h. In itself a reasonable number but to his surprise he found that the rear windshield had the same specs. He checked with his fellow monkeys, pardon colleague’s, in engineering, but they all replied: “that’s the way it’s always done.”
Putting his weight behind it, the rear windshield got redesigned to withstand only moderate speeds plus some wind gust, resulting in significant cost savings. That was until the first batch of cars were delivered to the dealers: many had broken rear windows. Can you guess why?

Which brings us to our second psychology experiment (or first since we are not counting the monkey one.)
Stanley Milgram conducted a series of experiments in the basement of Yale University where discovered a very high portion of the participants from a diverse range of occupations with varying levels of education, would obey an authority figure that instructed them to perform acts. Even if they could reasonably assume that the results of these acts would be catastrophic such as apparently causing serious injury and distress.

The machine sure looked real

The doctor orders the participant, the subject of the experiment, to give what the latter believes are painful electric shocks to a learner, who is actually an actor and confederate. The subject is led to believe that for each wrong answer, the learner was receiving actual electric shocks, though in reality there were no such punishments.
If the participant hesitates, the doctor will change the tone of his instructions: Please continue. ”¨The experiment requires that you continue. It is absolutely essential that you continue. You have no other choice, you must go on.
Though this research is also not without critics it reveals a similar deep-rooted recognition of corporate behavior. Your team may not be monkeys that do no longer remember why things are done, but how often do the ask: “why should we do this at all?” Well because I say so!

But wait a minute; I’m a nice guy! I’m all into this Scrummy team autonomy thingy, as long as they build my product vision right? Well yes and no. It depends a bit on how strong you are playing the doctor.

In his book Interpersonal diagnosis of personality, Timothy Leary describes the interpersonal circumplex model which consists of two orthogonal axes with 16 segments, two- by-two segments forms an octant; total combined the model counts eight octants. Which is way too complex to remember in the trenches, so we will use the simpler variant: 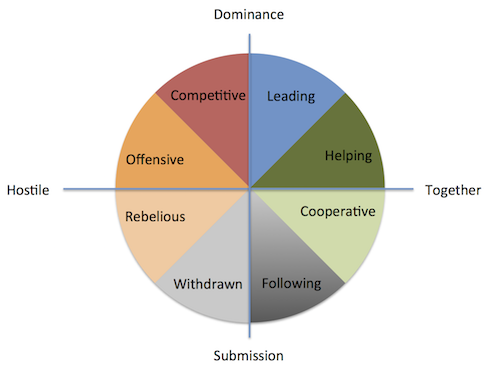 The explainer of behavior (to some extent)

In a nutshell, what Leary found is that dominant behavior provokes submissiveness and submissive behavior provokes dominance. Hostility provokes hostility, and togetherness attracts togetherness.
As Product Samurai we know that each attack requires a specific counter so what do we do if your boss/tech lead/stakeholder/CEO exhibits a certain behavior?

My word is law in these lands

Competitive behavior is very common in the enterprise environment. Based on my personal experience I would guess that in a group of about 75-100 people a dominant leader will emerge unless an alternative leadership structure or model has been implemented. This type of leader is often found having an option on almost every detail of the product and it is easy to see that this is a shortcut to conflict.
The stronger the competitive approach, the easier one will reply with a rebellious stance (guilty as charged.) Or with perhaps a bit less testosterone: withdrawal of the discussion “we will do it your way then, what do I care?”
In one of my previous blogs I explained the principles of Aikido and how the head-on or withdrawal strategy is unsuccessful. The more we give way to our opponent, the more he will come at us, and rebellious behavior ends in increasing the hostility.
We need to get to the affiliation side of the rose! Remember that togetherness attracts togetherness. So the proper response is to take a dominant but friendly position, now we need to defend this position until the other flips to the togetherness side of the rose as well.
How do you achieve this? Well, open questions work well: e.g. “Explain to me why you want this” etcetera. When the ego has subsided you can pick a different spot in the rose by asking “help me understand” you move your opponent into the leading / helping segment where he or she will be comfortable.

That’s not how things are done around here

We now circle back to our monkey experiment. What if our monkey, pardon colleague, takes a withdrawn stance to any proposal? What follows is a waterfall of complaints about the management and all sorts of top-down decisions will be used to demonstrate that they just don’t get it, they don’t understand him, don’t listen to him, etc. In short: we should never go for the banana.
As zookeeper, pardon Product Manager, you may want to reply with a dominant attitude, but that is exactly what our colleague wants, his strength is derived from his position.
Last Judo match my oldest son competed in he was met with a very passive opponent, as a result I saw my son taking increasingly greater risks in trying to overcome the passiveness of his opponent, which nearly led to defeat. In Judo fortunately, penalty points are given for passive behavior and favors for those who show willingness. There is no such rule in business, you must make the other participate or leave the fight.
To create breakthrough under the given”¨circumstances of submissive unfriendly”¨behavior one needs to take a friendliness”¨and openness position.
A wonderful anecdote by Jan van Setten springs to mind in which he countered a “this won’t work here” person by making him advisor to the CEO. Arguing that if this person knew all the possible ways the project could fail, he would be a well fit to lead.
In other words, you need to mirror the submissive unfriendly behavior and communicating in a submissive friendly manner. Ask open questions and give the initiative back to your colleague. If you can manage it long enough.

Group behavior on “that’s how things are done around here” is rooted deeply in how the group looks at their natural leader. Authority figures will be followed even the request is conflicting with what the individual may think. The answer to this behavior lies assuming the opposite position in the Rose of Leary.

“The most damaging phrase in the language is: it’s always been done that way” – Grace Hopper

P.S. Oh and the rear windshields? Guess which way the cars were facing when they were put on the transport.