In the age of disruption incumbents with decades of history get swept away by startups at an alarming rate. What allows these fledgling companies to succeed? What is their strategy and how can you defend against such an opponent?
I found that that the similarities between Judo and Business strategy allow us to apply the Judo principles to become a Product Samurai.

There are people who learn by reading (carry on doing so), people who learn by listening and observing (see the video registration) and people who learn by experiencing (sign up here). With that out of our way, let’s get started.
Enter the dojo
The dojo is a place where Judoka’s come to practice. One of the key things that make Judo great is that it can be learned, and it can be taught. To illustrate just how powerful it is and what the three core principles are I asked my 9-year-old daughter to give a demonstration.

The three principles of Judo Strategy
JigorŠ KanŠ founded Judo after having studied many different styles. Upon reaching a deeper level of understanding of what works and what doesn’t he created his philosophy based on the rule of “maximum effect with minimal effort”. What contributed to this rule became part of Judo, what did not contribute was discarded.
The operation of disruptors is not much different. With no past to hang on to, startups are free to pivot and take technology, processes and tools from the best offerings and combine them to a new technique. If they do not operate on the principle of “maximum effect with minimal effort” they will die. This is a luxury that incumbents have but usually not leverage. Typically the incumbents have the capital, equipment, skills, market knowledge, channels and people, still choose not to leverage.
Movement
The first principle in Judo is movement. Before we get in close with our opponent we seek to grab him in a favorable position. Maybe we can grip a sleeve, or arm and catch the opponent off guard. As a disruptor I also seek for uncontested ground. A head on attack on the core product of an established player is usually met with great resistance, as a disruptor I cannot hope to win that battle. 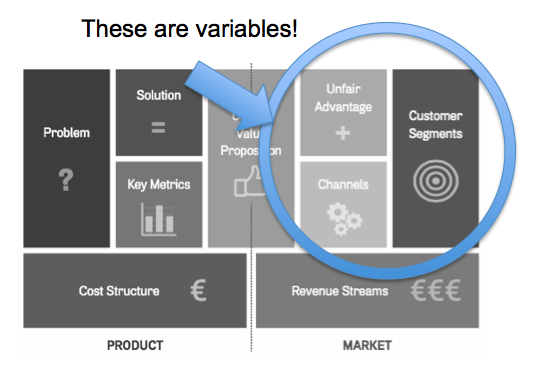 Figure: Variables in the Lean Canvas

So to seek uncontested ground, means launching under the radar. This will go against the advice of your marketing director who will tell you to make “as much noise as possible”. This will indeed attract more people, but also tell your opponent exactly what you are doing. So have your marketing align with your ability to execute. Why go multi-lingual when you can only serve local customers? Why do a nation wide campaign when you are still running a pilot in a single city? Why pinpoint the shortcomings in your competitor’s product when you cannot outpace them in development (yet)?
At some point contact is inevitable, but a good disruptor will have chosen a vantage point. By the time Dell became noticed they had a well-oiled distribution network in place and were able to scale quickly, whereas the competition still relied on brick and mortar partners. Digital media like nu.nl came out of nowhere and by the time traditional newspapers had noticed them it was not only hard to catch up, but their opponent had defined where the battle would take place: in the land of Apps, away from the strengths of traditional media. There is still a chance for incumbents, and that is to out innovate your opponent and to do so you have absorb some disruption DNA yourself.
Balance
The second principle is balance. Once we have gripped our opponent we are trying to destroy their balance whilst strengthening our own. Ironically this usually means keeping your enemies close. Perhaps the best possible example of this is the “puppy ploy” that Apple pulled with the music industry in the early days of iTunes. By emphasizing that downloadable music was not really their business (it only represented 1 or 2%) and was highly unprofitable (due to illegal sources like Napster and Kazaa) did Apple obtain the position it still holds today, and became the dominant music platform. As history repeats itself, a small company from Finland did the same thing with streaming, rather than owning the music. If you close your eyes you can hear them pitch: “it’s only a few percent of your business, and it’s like radio, does radio effect your business?”.
A little bit closer to home, I’ve seen first hand how a major eCommerce platform brokered deals with numerous brands. Sure, there is a kickback involved, but it prevents your competitors from opening their own store. By now they have become the dominant player, and their partners have come to rely on their digital partner to run the shop for them. It’s a classical example of keeping your enemies so close, that they cannot leverage their strength.
Leverage
My favourite category of throwing techniques (Nage Waza) are the Sutemi, or in English “sacrifice throws”. In these techniques you typically sacrifice your position so you can leverage the power of your opponent.
Basically it means: go after sunk cost. Observe your opponent and learn where he has invested. Virgin Air does not fly out of major airports, therewith circumventing the enormous investment that other airlines have made. Has your opponent invested in a warehouse to support building a one-day delivery service? Make delivery cost free! Is it a platform battle? Open source it and make money from running services on top of it.
Does it hurt? of course it does! This is why the first thing you learn in Judo is fall breaking (ukemi waza). The question is not if you will fall, but if you can get back up quickly enough. Now this is not a plea for polka style pivoting startup behavior. You still need a strategy and stick to your product vision, but be prepared to sacrifice in order to reach that.
I once ran a Customer Journey mapping workshop at Al Jazeera. Though we focused on Apps, the real question was: “what is the heart of the brand” How can we be a better news agency than ABC, BBC, CNN etc.? By creating better articles? by providing more in-depth news? Turned out we could send photographers where they could not. They had invested in different areas and by creating a photo driven news experience they would be hindered by sunk cost.
If you manage to take the battle to uncontested grounds and have destroyed your opponent’s balance, his strength will work against him. It took Coca Cola 15 years to respond to the larger Pepsi bottle due its investment in their iconic bottle. By the time they could and wanted to produce larger bottles, Pepsi had become the second largest brand. WhatsApp reached a 10 billion messages in 2 years; you don’t have Coca Cola’s luxury anymore. 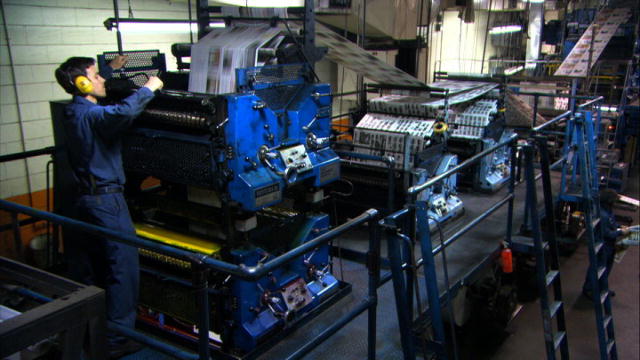 Figure: Awesome machines that you need to let go of

Why did Internet only news agencies like nu.nl scored a dominant position in the mobile space? Because the incumbents were too reluctant to cannibalize their investments in dead tree technology.
Key take away
Judo can be learned and so can these innovation practices. We have labeled the collection of these practices Continuous Innovation. Adopting these practices means adopting the DNA of a disruptor.
It’s a relentless search to find unmet market needs, operating under the radar until you find market-fit. You can apply typical Lean startup techniques like Wizard of Oz, landing pages or product bootcamp.
Following through fast means scalable architecture principles and an organization that can respond to change. As an incumbent, watch out for disruptors that destroy your balance; typically by running a nice of your business for you that will become strategic in the future.
Finally: if you are not prepared to sacrifice your current product for one that addresses the customers need better someone else will do it for you.


Want to learn more about using martial arts in product management? Go order the book from bol.com if you are in the Netherlands or Belgium or sign up to get the international edition.

Hi Andrew,
I can understand your struggle, you are referring to the sports form as it is practiced since 1961. The judo principles actually date back to 1882 when JigorŠ KanŠ founded his variant of Jujutsu.
Kano was 1.57m and about 41kg, and at the core of his art is to overcome an opponent that is bigger than you, hence asymmetrical engagement as you so eloquently put it.
The weight classes were introduced in 1961. Up until then it was always assumed that the technical superior, more nimble judoka would always beat a larger opponent. A 2m tall Judoka weighting 114 kg from *drumroll* the Netherlands, literally shocked the Judo world by capitalising a single mistake and become world champion, after which weight classes were introduced.
Key message is that if your opponent is untrained (or less) in Judo strategy you have a good chance of dominating the business as long as you stick to the three principles. If he is equally skilled you are in for a tough fight and strength and weight will matter.
Think of SAP vs Oracle as two large sumo wrestlers. More or less equally balanced, but both taken by surprise when a company like SalesForce emerged. Taking them by surprise and using their own inertia against them.
I hope this gives you some food for thought over the weekend. I’m off to the dojo, hoping to find a superior opponent to learn from 🙂

Absolutely!
Musashi’s metaphor for strategy is that of the bulb and the flower. The “bulb” being the student, the “flower” being the technique. He also notes that most teachers seem to be mostly concerned with their technique and its beauty.
Musashi writes: “In this kind of way of strategy, both those teaching and those learning the way are concerned with coloring and showing off their technique, trying to hasten the bloom of the flower”.
I’m working on a chapter on that 🙂

Hi Chris, I got a chance to read your book. I must say it is an amazing way of explaining strategy and techniques , though i know very less about judo but your book has explained it so well. I found the book very interesting and read it in a day. Now slowly slowly digging deep for each sections. Thanks a lot , its a great book.

Thanks for the kind words! all the feedback, both positive and improvement points are more than welcome. I’m also happy to announce we have international shipping up and running at http://www.theproductsamurai.com so spread the word!

Product Management | Uncategorized
Nobody cares about your product (Part 1)