Scaling the productowner (PO) role is tricky business. When you scale up too much within the same context, things become cumbersome. We don’t want to bring back the same centralized fear ridden ineffective decision making climate, we tried to kill off in the first place. When people spend so much time and effort to bring back entrepreneurship, they don’t want to create layer over layer of hierarchical PO/CPO relationships.
So if there is this perceived risk of fallback involved, why do we actually want to scale the PO role at all?

Here are some reasons I came up with when thinking of a project context(*)
The perceived need for scaling could follow as a reaction to the scope of the project at hand. It is quite common within projects to try and do as much as possible parallel development of different semi-detached functional areas of the product. This comes quite close to how I used to manage projects in the past. Whatever in the same timebox could be done in parallel, should. I was very efficiency driven back then, but also taught and stimulated to think this way.
Within this paradigm it would be preferable, that the PO has some sort of party around him helping to create the user stories he would be in charge of. Creating big teams gives us more capacity to do more work in our timebox. Larger teams and more work create the need for more coordination, because of limited span of control, thus creating the need to scale.
Also, I think we are still very much driven by the paradigm of the chain of command. It is simply comfortable when there is someone who can make the tough decisions for us and mediate between us whenever conflicting interests arise. The need for extra coordination between and over PO’s in the same context thus fits very naturally with our needs in a growing project context.
Come to think of it, maybe it is no coincidence that the person designated CPO is more times than not the first PO that was on the project. If we look deep within ourselves wouldn’t every PO actually want their first project steps to be so successful, that the extra means are granted to grow the team and consequently rise above to lead the way as CPO? And should we be that CPO, would we ever fully trust another colleague with the work we carefully prepared and poured our blood sweat and tears into? It would be great if we could somehow keep some sort of supervision on the others. Make sure the projects success and our hard work isn’t killed off in the next sprint or two. Scaling with a CPO construction would provide means to fulfill these needs.
Of course the above reasons to scale could be valid, but there are also downsides to them.
Although doing parallel work may sound efficient, maybe validation with your customers shows that the product increment doesn’t fulfill their needs as thought up in the first place. Since you have done a lot of parallel work, the risk of waste is also greater. Should you need to radically pivot your product in another direction, it will be much harder due to the already large scale of your operation.
I thus think that scaling towards having different teams work on the same backlog potentially inhibits us from maximizing validated business value, as you are pulling forward less important features from the backlog, before actually validating and thereby knowing whether you have actually delivered value with your top items. From this angle, it would be wise considering not to scale.
When scaling from success, we run the risk of slipping into a power monger mode and form a team beneath us to gain status and control instead of branching out sideways.
When this happens we are not working towards joint company stakeholdership any more, but we trying to build our own ivory towers. When the CPO leading the PO’s claims decisive power in certain areas, I believe you would not be creating the right entrepreneurial environment in which decisions are based on arguments and value for the customer and company. Maybe, as a PO, if you already know you need a decision from the CPO, you are inclined to use other influencing methods rather than comparable and less subjective measures than for example business cases, jeopardizing the quality of decision making and therefore the success of the product. 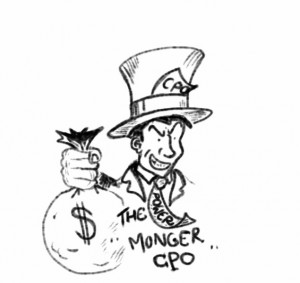 During my study, I was taught “there is no one best way to organize”. I think of this line as a universal truth, that in my opinion also applies to scaling the PO role. I therefor think that form is less important than the route taking you there. Knowing that there are risks involved in scaling and consciously dealing with them helps you along this route to find a form that works for you.
(*)Scaling is also common in productline contexts (for instance a CPO over a group of PO’s managing a product family) or within business units where you would have various strategic themes that the CPO would like to have implemented over the same time period.

Agile | Uncategorized
OMG They made me Product Owner!!