Don't even think of a metrics dashboard!

I used to be a big fan of tools. I still am…..but not as big a fan as I used to be. This changed after I realized the meaning of ‘Individuals and interactions over processes and tools’. Especially the “interactions over tools” part. This week’s blog Eat your failure cake! Learn from your mistakes. motivated me to share one of my failure cakes with you.

At that time I was the project manager and scrum master of a software development team. As a team we embarked on our exciting mission to develop a new product. We did this in a Scrummish, more or less Agile way. 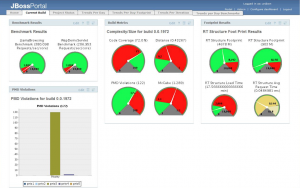 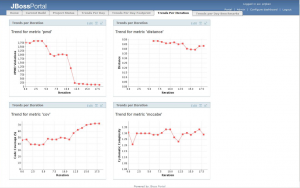 We set-up a continuous integration environment and we measured a lot of things. The metrics we collected included #PMD violations, unit tests ok/failed, #FitNesse tests ok/failed, code coverage, cyclomatic complexity, distance, velocity, etc.
For the product we knew that performance was going to be very important. So we ran various automated benchmarks on a daily basis. The results were collected automatically by the build system and stored in a database for reporting purposes.
Besides that I needed this to report to management, it was also quite fun to implement 🙂

Then I had a brilliant idea: it would help the team if I would make all this information available on a dashboard! So I spent a couple of months (including lots private spare time) implementing this based on JBoss, Pentaho Portal/Reporting, and MySQL. While implementing this I learned a lot about portals and Pentaho. On the portal side of it, the team members could define their own dashboard and view on the metrics. Cool.
Except…..nobody (except for myself) looked at it…..how come?

In the weeks that followed going live with the dashboard it struck me that team members stood by the kanban board discussing possible bottlenecks and what to do about these. The kanban board happened to be within 2 meters of the kitchen where the coffee machine stood.
So what happened was that every time people went to get a cup of coffee, they gathered by the kanban board (because the kitchen was too small) and discussed the latests events and what to do about it!
…..the next day I printed some of the most important charts and stuck them at an empty spot on the whiteboard. Guess what happened!

Before deciding on a tool think about what you want to achieve with it. In the example above the goal of automatically collecting metrics and create charts was OK, but having an electronic dashboard to replace interactions within the team was not a very good idea. That was time to eat my own failure cake, with a cup of coffee.

Agile Transformation
Is Scrum Agile and is Agile Scrum?