From Node to Deno: a test drive of the new kid in town If you like Node and Typescript you should be curious to checkout Deno, the new baby from Node’s creator Ryan Dahl.

Deno was born from Ryan’s regrets on some design choices made in Node, especially around security, module management and APIs.
Deno addresses those regrets with a brand new Typescript runtime built on Rust and V8 that has several goals:

Does it succeed in accomplishing them?
That’s exactly what we set out to find during our last Innovation Day at Xebia.
Here are our first impressions after playing with it for a few hours.

The first thing we noticed about Deno was how easy it is to get started.
It is a breeze to install with a one liner from the command line:

Also, it is a single executable that provides many development tools out of the box instead of having to rely on third party solutions: it has a built-in linter, formatter, test runner, bundler, a REPL console and more. 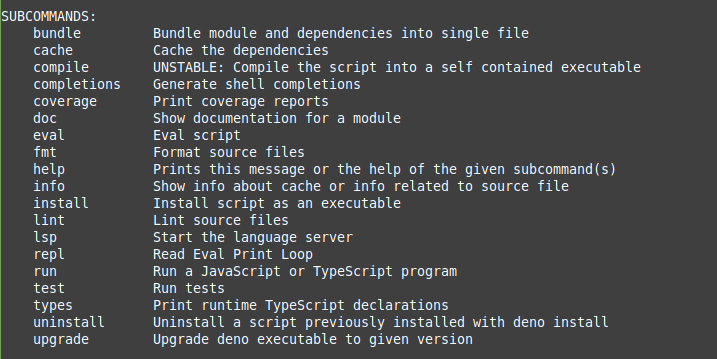 We had a fully working setup in just a couple of minutes spent installing a plugin for our favourite IDE. There’s support for Visual Code, Atom, IntelliJ, Sublime, Vim, and many others.
Given the similarity with Node and Typescript we were able to get up and running incredibly fast.

Running a program is done with the deno run command (it also supports a –-watch mode).
You can run a remote script:

Or run a locally defined one:

The script above allows us to already see several interesting bits:

Deno takes care of downloading (and caching) the dependencies, bundling your application and running it. No other tools or configs are needed. Optionally you can even compile your program into a native executable!

Let’s look at another example:

Here you can see that Deno has native support for promises, top level awaits, and even modern Web APIs like fetch.
Actually in Deno most Web APIs like Websockets, Streams and Crypto work natively, and you can even run WebAssembly code from it.
Server-only APIs are boxed in the Deno namespace, so if you don’t use them you can easily end up with code that can run in the browser!

You run it with deno test, and it even has support for coverage reports.

During our session we tried out several APIs and features, including streams and the native support for JSX that makes server side React rendering very straightforward.
We also tried some third party modules, like the Oak Server which is some sort of Deno equivalent of Express.

Overall we had a very good time, everything worked as expected and we could accomplish our goals with minimal effort.

Worthy to mention is also that the Deno Team offers a free (at the time of writing) service to host and run your projects in many regions worldwide simultaneously, automatically serving users from the closest location.

It is called Deno Deploy, we tried it ourselves and we found its usage extremely simple: just login in https://dash.deno.com/, create a project and point it to a hosted TypeScript/JavaScript file or to a Github Repo.
No configuration or extra steps are required and it just works.
It is a bit minimalistic, it doesn’t yet integrate with Gitlab, Bitbucket or other vendors, and it probably isn’t yet a wise choice for serious projects, but it is definitely a good foundation for an interesting offer.

So did we like everything we saw?
No, we did encounter a couple of minor nuances:

Another doubt about Deno comes from its decision to completely stay away from Node and especially from its ecosystem of thousands of NPM modules.
Luckily in recent times there have been several steps towards allowing their usage.
NPM Modules that don’t use the Node API can already be used and there are several services like the excellent Skypack CDN that make it very simple:

For the other modules there’s an ongoing effort for adding a Node compatibility layer to Deno .

The last remaining doubt is whether Deno can find its place in the crowded space of technology stacks.
Despite reaching 1.0 last year and a honourable result of more than 79K stars on Github, it has yet to prove itself as a mature technology that is here to stay. Not many companies have adopted it yet in production, and it doesn’t seem like it’s getting a lot of traction in terms of Google Trends, job offerings or other metrics.
It is definitely not as groundbreaking as Node, and many still doubt whether its runtime and standard libraries are stable enough for mainstream acquisition.

However it is definitely not a dead horse yet:

There’s still time for Deno to shine, but the next coming months are going to be crucial.

From what we have seen in our short time with it, Deno proved to be a productive, pragmatic and developer friendly technology with a very sound core design.
Only time will tell if they will succeed in their mission, but we had a great time with it and we will definitely keep a close eye on how it evolves.