Workers of the Scala World, Unite!

From my own experience, the Scala community, having grown from the same genetic material as the Java community, does share a similar vibe. However, without the big corporations backing the language, a lot of the community energy seems to go into local initiatives, disconnected from each other: let’s just say, small pockets of Scala resistance. I can imagine that does not necessarily help in Scala taking over the globe. 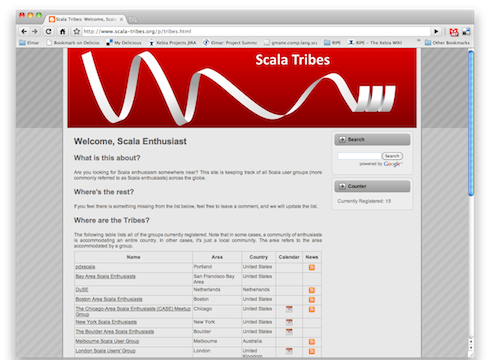 In order to contribute my share of changing all of that, I just uploaded a single serving site, Scala Tribes, serving only one purpose: to provide an overview of all of these Scala user communities found across the globe. This should not only help you to find a local group of Scala users wherever you are; it will hopefully also serve as a way to integrate these disjoint isolated Scala communities.
Currently, it’s just a list of pointers, allowing you to directly jump to the various communities, to directly tap into their news feeds, or to keep track of the events they organize by accessing their calendars.
If you happen to be part of local Scala initiatives like these, then I would encourage you to send me some pointers. Currently, the list contains only to 15 user groups, but I am sure there is more. (Like, I am not capable of decoding anything but Dutch, English, and to some extent German. That means that anything in any other language escapapes my radar.)
Since every group in this list is associated with a woeid (Where On Earth ID), creating a map out of it turns out to be quite easy. The result is below. As you can see, there’s not too much coverage for Asia, Africa and South America yet. Perhaps you can be the first to add some pointers for those continents.

I would also be interested to hear other thoughts on this. Is there anything else that you would like to see?

Uncategorized
Getting the Java out of your Scala