In many Scrum projects, user stories that are Done at the end of a sprint have not yet been put into production. In other words, production is often not part of the Definition of Done. There can be several reasons for this. Examples are:

I have seen several Scrum projects where the work that was needed to bring Done user stories to production was far less transparent than the work that was performed in a sprint. Have you ever seen acceptance testers being frustrated because software was not integrated and deployed correctly? A good first step to improve such things is to introduce some transparancy: which steps are needed, what work is in progress, is there a bottleneck? Besides the Ready Kanban described by Serge Beaumont in an earlier blog, we introduced the Done Kanban.
If you combine this Kanban with the Scrum Taskboard and a Ready Kanban, the whole flow of user stories form idea to production is visualized. This enhances transparency of work that is done to user stories outside of a sprint. Below is a picture of a Scrum Taskboard that is combined with two Kanbans. The Ready Kanban shows user stories that are made Ready to be picked up in a sprint. The Done Kanban shows the flow of user stories from Done to production. 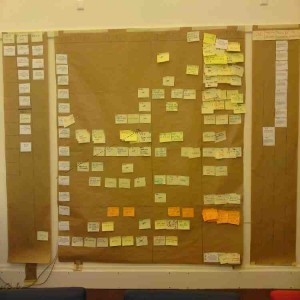 Below the Done Kanban is shown at a later point in time. By this time, it had really proven its value. In the project, user stories were integrated one-by-one with code that was made by non-Scrum teams with a longer release cycle. After introduction of the Done Kanban, this integration became a joined effort instead of a single person’s job. It also became more clear to everyone which user stories had been put into production. 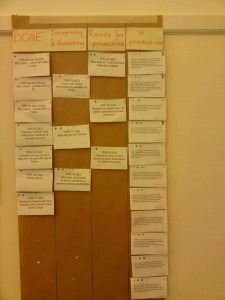 To conclude, user stories often exist before they are Ready to be picked by a team in a Sprint. After they are Done they are often not yet in production. In combination with the Scrum Taskboard, Ready and Done Kanbans are a great way to visualize the complete flow of user stories form idea to production.