The READY Kanban: the Product Owners' Scrum Board

In my previous posts about the definition of READY and Flow to Ready, Iterate to Done I have tried to shed some light on the Big Black Hole of Scrum: the Product Owner. This is number three in the series.
In my previous blog post I presented the stages that a backlog item flows through before it gets to Ready. But those were the ideas behind it: in this blog post I’ll show how I’ve implemented them in practice. I’ll show you two interesting examples.

The basic Ready Kanban has three columns: New, Preparing and Ready (see the explanation in the previous post of the series). You can add the fourth “In Sprint” if you want to show what’s currently in the Sprint, but that’s only really needed if it’s not hanging close to the Scrum Board: otherwise the Scrum Board effectively functions as the In Sprint column. It’s good to have a visual cue in the Preparing column to show the limit on work in progress, like a fixed number of slots for user story cards.

This board was created by Rob Buster, one of the Product Owners at bol.com. As you can see his board has four columns since this board is hanging close to his desk, which is on a different floor from the team floor. 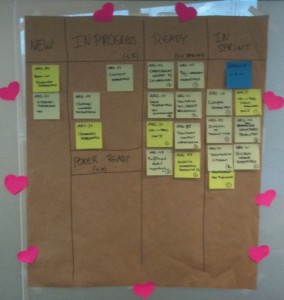 Some things to note on his board: 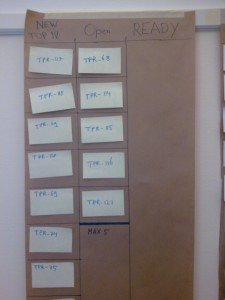 This was the first Ready Kanban ever to be put up. I initially filled it with the top of the backlog that was in preparation: the top five in the “Preparing” state, and the next 10 in the “Top 10 New” state. Note that it’s hanging in its logical place: on the left side of the Scrum board, in line with the overall left-to-right flow of user stories.
This is that same board a few days later (I’ve fudged out the titles): 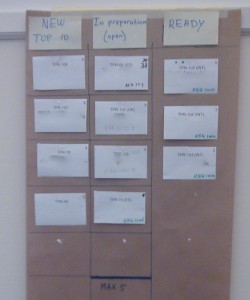 Many interesting things had happened here:

All in all, I am REALLY happy with the results I’ve seen when I applied this board. All of a sudden the PO’s have their information radiator, they can coordinate with others, stuck user stories are clearly visible, and now there is a basis for measuring the performance of the PO role. We can make a trend graph showing the level of the Ready Buffer (the PO’s version of the burndown…), we can measure average completion time of a user story (in line with Lean’s “takt time”), and the PO can bring some sanity back by limiting the work in progress in the Preparing state.
So please spread the word and make sure as many PO’s as possible know about the Ready Kanban: the PO role is by far the hardest of all roles in Scrum, and I know from experience that all help is welcome… 🙂
What’s up next? I hope I don’t take as long as last time, but I’ll show you how I implemented the Ready Kanban in JIRA. When you have a distributed PO role (or any distributed situation for that matter), you’ll need support by tooling to bridge the gap…