I’ve taken up sketchnoting recently, and I love it! So, what is sketchnoting? Why is it useful? And how do you get started?

The answer to the first question is pretty straight-forward: Sketchnoting is a way of note-taking that involves not just notes, but also sketches. Mike Rohde, the godfather of sketchnoting, defines it as taking rich visual notes, mixing handwriting and drawing to create a more appealing set of notes. And that’s exactly what it is.

To me, sketchnoting is appealing, because as it turns out I’ve been doing it for the past decade, thinking I should really structure my “mind maps” more like Tony Buzan‘s. Then, I saw an awesome TEDx vid by Rachel Smith from The Grove Consultants and encountered The Sketchnote Army. It dawned on me that what I’d been doing had a name, was not as strange and uniquely “me” as I’d previously thought, and it was gaining momentum as a cool thing to do at conferences and meetings. I decided to get better at sketchnoting and went looking for ways to do so. I joined a Meetup group by Petra Hegenbart. Never made it to one of those meetups, but in the online discussions we had leading up to the meetups, Petra mentioned an online Rockstar Scribe course by Alphachimp. I enrolled in the course and subsequently read The Sketchnote Handbook by Mike Rohde. 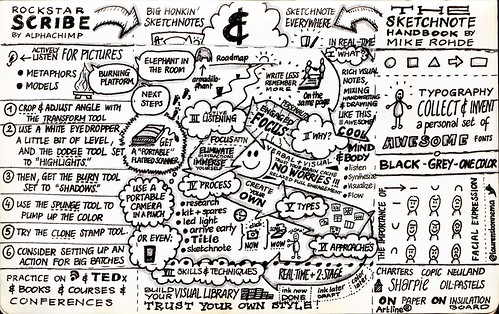 And now, I’m hooked. I’ve developed the sort of passion for sketchnoting that keeps you in a continuous flow. I _love_ to sketchnote, and feel like I _have_ to do it. Now, in and of itself, the fact that I think it’s fun is probably not enough reason for you to try your hand at it. So what is?

The main reason to start sketchnoting, in my opinion, would be that it allows for true active listening, where you engage with a topic in a holistic way allowing you to focus your attention and fully immerse yourself in a subject, be it a talk at a conference, a meeting or a group discussion. If you show what you’re doing to the people around you, e.g. by drawing your notes on a whiteboard, flip chart or projector, sketchnoting can contribute to a highly interactive and adaptive meeting. There is something about seeing the group discussion being drawn as they speak that captures people’s imagination and holds their attention in a way that just doesn’t seem to happen with a Powerpoint, Keynote or even a Prezi.

So, how do you start? That’s the beauty of sketchnoting: You’re probably ready to start right now. Just get some paper and your favorite pen and you are ready to go. Just start listening for metaphors and models in the conversations around you and draw those images combined with carefully calligraphed text. If you’re like me though, you like to select “the best” gear for everything, including sketchnoting. If that’s you, this is my kit:

Any way your structure your notes is fine, but there are a few common layouts you could use to get started. A two- or three-column spread with a header and footer, for example. Or a nine-box layout with the main topic in the center (yes, just like a mind map!). Basically, any page layout you find in a magazine or on a website might be useful.