by Arjan Molenaar
12 May, 2016
Uncategorized

On the 15th and 16th of April CITCON Europe took place in Cluj-Napoca (Transylvania). CITCON is an open spaces conference. The agenda is made up by the people attending the conference. Because of this there are always a couple of nice takeaways.
This year Ivan Moore (@ivanrmoore) made a claim that you can not do CI without using monorepos. A monorepo is simply one repository where all source code ends up. This is contrary to a setup with (for example) Git source control where you have a single repository per module. The idea of having a single (big) repository with all code seems strange. After some thorough discussion the merits of monorepos were clear to me. 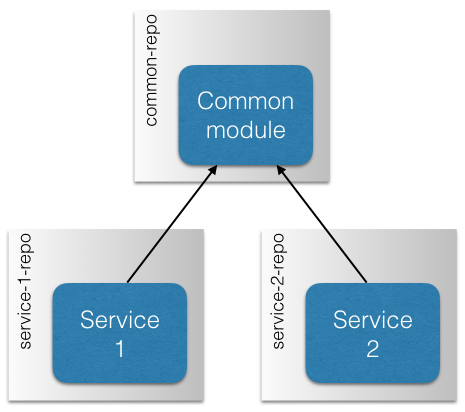 If step 5 goes bad, we’ll have to fix the common module, leading to another release. Well, you get the drift. Module 2 is integrating too late.
If service 1 and 2 and the common module were in the same repo, life becomes simpler: there’s only one version of the common module to take into account: the one on your current branch. This implies that the build will break instantly when an incompatible change has been checked in ( == fast feedback, yay!). Furthermore, it will avoid code duplication: a disjoint common module is everybody’s responsibility => no one will take full ownership. At some point it becomes easier to create functionality and not move it to the common module, but replicate it in service 2.

Having everything in one place makes it easier to refactor code, find duplicated code and even perform structural changes over all modules in your repo.
One very important feature monorepos offer is repeatability: when you rely on snapshot releases the results may vary over time depending on the current snapshot version. Even if you tag all builds, it eats up lots of resources where a majority of the binaries are never ever used.
With monorepos, the version (state) of the application is determined by a commit hash/revision number.
It is worth noting that companies like Google and Facebook take this to the extreme: all source code for the whole company ends up in one repo including third party code. I would assume it’s a good start to put all code for your current project in one repo (start small), and leave external dependency resolution as is. This would promote bigger refactorings and improve code reuse while saving you the version upgrade hassle.
So what about the downsides to this approach:

All in all I am pretty convinced that the advantages outweigh the downsides. In retrospect, considering the projects I did over the last couple of years, every single one of them would benefit from using a monorepo, instead of a per-module-repo.
Aside: Modern IDE’s like IntelliJ and Eclipse can sort out these types of source code dependencies. Changes in the common module could cause errors in the service module(s). Although this solves the dependencies to some extend for one developer, it’s not a solution a complete team can rely on.
[1] CI servers can do shallow checkouts, so there’s no burden here.