End of an era in my garage

This weekend I was forced to throw away a cardboard box. So what, I hear you think and I agree, but it being Sunday and me being in a hazy reflective Sunday afternoon state of mind (nono, no alcohol yet) and the box being the specific cardboard box it is (or rather was), I started thinking of the box’s significance for the future.

This is a picture of the cardboard box in question in it’s final state just before it got thrown into the recycler. 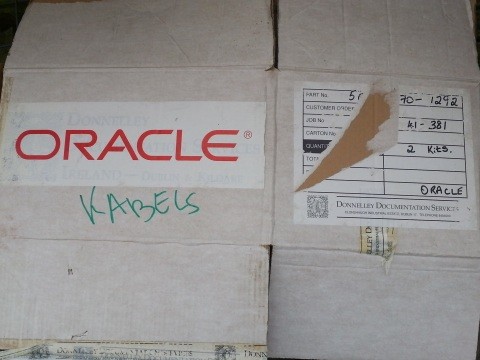 As you can see it’s got a large sticker saying ‘Oracle’ above the word ‘KABELS’ written in my clunky handwriting. The word kabels doesn’t really matter, it just indicates the box was used to hold various lengths of electrical wire. Next to the Oracle sticker and the kabels text you’ll see a partially torn label from ‘Donelly Documentation Services’ in Ireland. It is in fact the box that was used to ship my very first set of Oracle manuals (for release 6 of the Database and probably 3.0 of Forms and more contemporary tools) in April 1992. Since that time the box used to hold manuals for consecutive releases of Oracle products stored in the trunk of my car. I used to take them with me to customers on various assignments.
Later I left Oracle and the box was used in two removals (it was of remarkably sturdy material) and ended in my garage holding bits and pieces of electrical wire.
Last Sunday I dragged it of a shelf and finally it’s corners tore spilling cables all over me and the garage floor. Exit box.
This is getting into a long winded intro, I know but there is an interesting similarity between the box and the changes in the tools I use in my professional life. After starting as an Oracle specialist I worked on Java software which became Oracle software later of course. Last Sunday I realized I was writing Java-ish software again for the first time in about a year. Android, but still.
I haven’t been using any of the software I grew up with for quite a while now. Relational databases are being replaced by key-value stores and even flat files. JEE servers changed into Spray and Akka. Scala and functional and reactive programming constructs rather than object oriented Java and its bolted-on lambda extensions. Angular-JS instead of, hey wait a minute, that looks like a fat client all over again (wondering what’s going to happen to it). Server software I work with is easy to install, unpacking a zip file instead of 500+ pages of manual guaranteed only on an outdated Linux version. Modern software runs on simple Linux boxes instead of high end hardware with 7 digit price tags. New and innovative solutions replace software with slow release cycles. Open source is definitely leading the industry.
I wonder, does the end of the box forebode the end of a whole class of software? And like the cardboard box, will some bits and pieces come back in other products? I’m just hoping that it won’t take 22 years to get rid of the last generation of software.