Have you ever used Little’s Law to explain that lower WiP (work in progress) limits lead to shorter cycle times? Ever tried to illustrate Little’s Law in an Agile game and found it doesn’t hold? Then read this blog to discover that it is exactly true in Agile games and how it really works.
Some time ago I gave a kanban workshop. Part of the workshop was a game of folding paper airplanes to illustrate flow. To illustrate Little’s Law we determined the throughput, cycle time and work in progress. To my surprise the law didn’t hold. Not even close. In this blog I want to share the insight into why it does work!

It is well known that the average number of items in progress is proportional to the average cycle time of completed work items. The proportionality is the average input rate (or throughput rate) of work items. This relation is known as Little’s Law. It was discovered by Little in the 1960s and has found many applications.
In kanban teams this relationship is often used to qualitatively argue that it is favourable for flow to have not too much work in parallel. To this end WiP (work in progress) limits are introduced. The smaller the WiP the smaller the average cycle time which means better flow.
A surprise to me was that it is exactly true and it remains true under very relaxed conditions.

In practise one considers Little’s Law over a finite period of time, e.g. 6 months, 5 sprints, 3 rounds in an Agile game. Also in practise, teams work on backlog items which are discrete items. After the work is done this results in a new product increment.
Under the following conditions (1) is exact:

A queuing system is a system that consists of discrete items which arrive at a certain rate, receive service after which they depart.
Examples of a queueing system. An agile team works on backlog items. A kanban team that works on production incidents. A scrum team.

An often used game for explaining the importance of flow to team is the game of folding paper airplanes. Many forms of this games exist. See e.g. [Heintz11].
For this blog’s purpose consider a team that folds air planes. The backlog is a stack of white paper. 3 Rounds of folding are done. Airplanes that are folded and fly at least 2 meters are considered done. 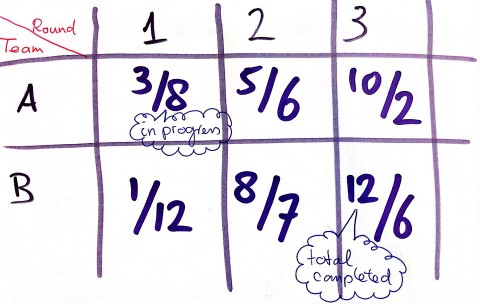 At the end of each round we will collect the following metrics:

The way I was always calculating the number for work in progress, throughput and cycle time has been

When calculated at the end of round 3, for Team A this amounts to:

The interpretation of work in progress, throughput and cycle time I got from working with cumulative flow diagrams. There are many resources explaining these, see e.g. [Vega2011].
The key to the correct interpretation is choosing the time interval for which to measure the quantities \( \bar{W} \), \( \lambda \), and \( \bar{W} \). Second, using the input rate instead of the throughput. Third, at the end of the time period include the unfinished items. Last, in calculating \( \bar{N} \) consider all items that went through the system.
When we reinterpret the results for teams A and B we get
Team A

Dividing the average work in progress by the average input rate we get 26/3 divided by 4 = 26/12(!). This is exactly equal to the calculated average cycle time!
Team B
In a similar manner the reinterpreted results for team B are:

What About Cumulative Flow Diagrams?

Now that we understand how to calculate the quantities in Little’s Law, we go back to cumulative flow diagrams. How come Little’s Law works in this case.
In the case of teams that have collected data on cycle time, work in progress and throughput Little’s Law work when done as explained in the section ‘Calculating Little’s Law’ because:

Little’s Law (1) holds under the conditions that (a) the system considered is a queueing system and (b) the observation or measurements are done over a finite time interval. It then holds independently of the stationaryness of the probability distributions, queuing discipline, emptiness of the system at the start and end of the time interval.
Calculate the quantities \( \bar{N} \), \( \lambda \), and \( \bar{W} \) as follows: