When developing an AJAX application you often end up with some data interchange format, like XML, plain text, or, in my case: JSON. The trouble with JSON, however, it that’s it’s quite hard to read. Not because it’s so complicated, but because it has been optimized for network communication, which in this case, means: all the whitespace has been stripped. Wouldn’t it be nice to have an integrated JSON formatter in your IDE to handle this? Well, now it possible!

What I did was to create a plugin for IntelliJ, to format your JSON code into some more readable (and formatted) code. Since a picture says more than a thousand words: a picture for your viewing pleasure: 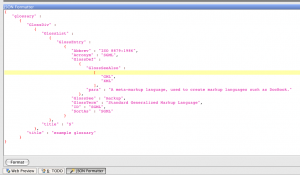 What you can see in the screenshot is the following JSON code, but formatted:

By pasting the above in the plugin, and clicking on ‘format’, you’ll end up with the result as seen in the screenshot, which is much more readable, and thanks to the RSyntaxTextArea has colors and braces matching. The plugin doesn’t do validation yet, but this is a helpful addition to make the JSON even more readable!
So, please check out the plugin (you can install it from IntelliJ’s integrated plugin manager), install the JSON Formatter plugin and tell me what you think of it!

Hey,
I tried your plugin, its really good. I can suggest two features. one is converting the formatted json to xml and the other is converting it into tree structure. If you can share the code may be I can help with the development. Let me know . my email is
vivekmongolu at gmail dot com
Thanks,
Vivek
wanted to extend it further by

Indeed, very handy.
Would be great to have it:
1. Integrated into Idea formatting framework so you can customize presentation
2. Display as tree +1

Can you please add a checkbox to disable validation.

One suggestion/request or question. Can this be integrated with the comparison tool in IntelliJ. Would be great for unit tests to see differences (readily) between expected and actual JSON strings.

I use intellij and big fan of it and I think this would be a good plugin. Sometime I use https://jsonformatter.org for Formatting and Validating JSON data.

Uncategorized
IntelliJ 8 has been released!