Upgraded my blog to Project Nami on Azure

My blog has been running on WordPress in combination with Microsoft Azure since the start. I always disliked the fact that i had to get a MySQL database using ClearDB to host it but it seemed the only way. A few days ago i made some mistakes and kinda broke my current blog (i won’t bother you with the details

) and had to do some reinstalls. Since quite some time passed i thought it might be good to do some research in the current possibilities of using native azure components for my datastorage.

the first thing i found was using MySQL in app with your Azure web app. This removes the dependency of ClearDB but you’ll still have some limitations such as being limited to a single instance and no features for access your database remotely. 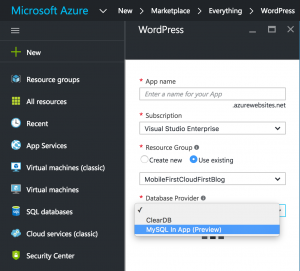 When i looked a bit further i found another cool project called “Project Nami“. Nami stands for Not Another MySQL Install and is a fork of WordPress that changed the database layer to talk T-SQL so they could add SQL Azure as the database layer.

Installing it was pretty easy. you can just get it from the Azure Marketplace when you search for “WordPress” or “project Nami” and after that it was installed in a few minutes.

I have to say the performance is great! the initial costs seem to be lower than they were before and my blog seems to be a lot more responsive. I really liked the upgrade to Project Nami so thought I share it with you so you might consider making the same switch if you are still running wordpress + mysql on Azure.

One downside of my screwing up my previous blog instance is that all comments are kinda lost. so thats why you might not see any comments on my older posts anymore.