Tutum is a platform to build, run and manage your docker containers. After shortly playing with it some time ago, I decided to take a bit more serious look at it this time. This article describes first impressions of using this platform, more specifically looking at it from a continuous delivery perspective.

The web interface
First thing to notice is the clean and simple web interface. Basically there are two main sections, which are services and nodes. The services view lists the services or containers you have deployed with status information and two buttons, one to stop (or start) and one to terminate the container, which means to throw it away.
You can drill down to a specific service, which provides you with more detailed information per service. The detail page provides you information about the containers, a slider to scale up and down, endpoints, logging, some metrics for monitoring and more .

The second view is a list of nodes. The list contains the VM’s on which containers can be deployed. Again with two simple buttons to start/stop and to terminate the node. For each node it displays useful information about the current status, where it runs, and how many containers are deployed on it.
The node page also allows you to drill down to get more information on a specific node.  The screenshot below shows some metrics in fancy graphs for a node, which can potentially be used to impress your boss. 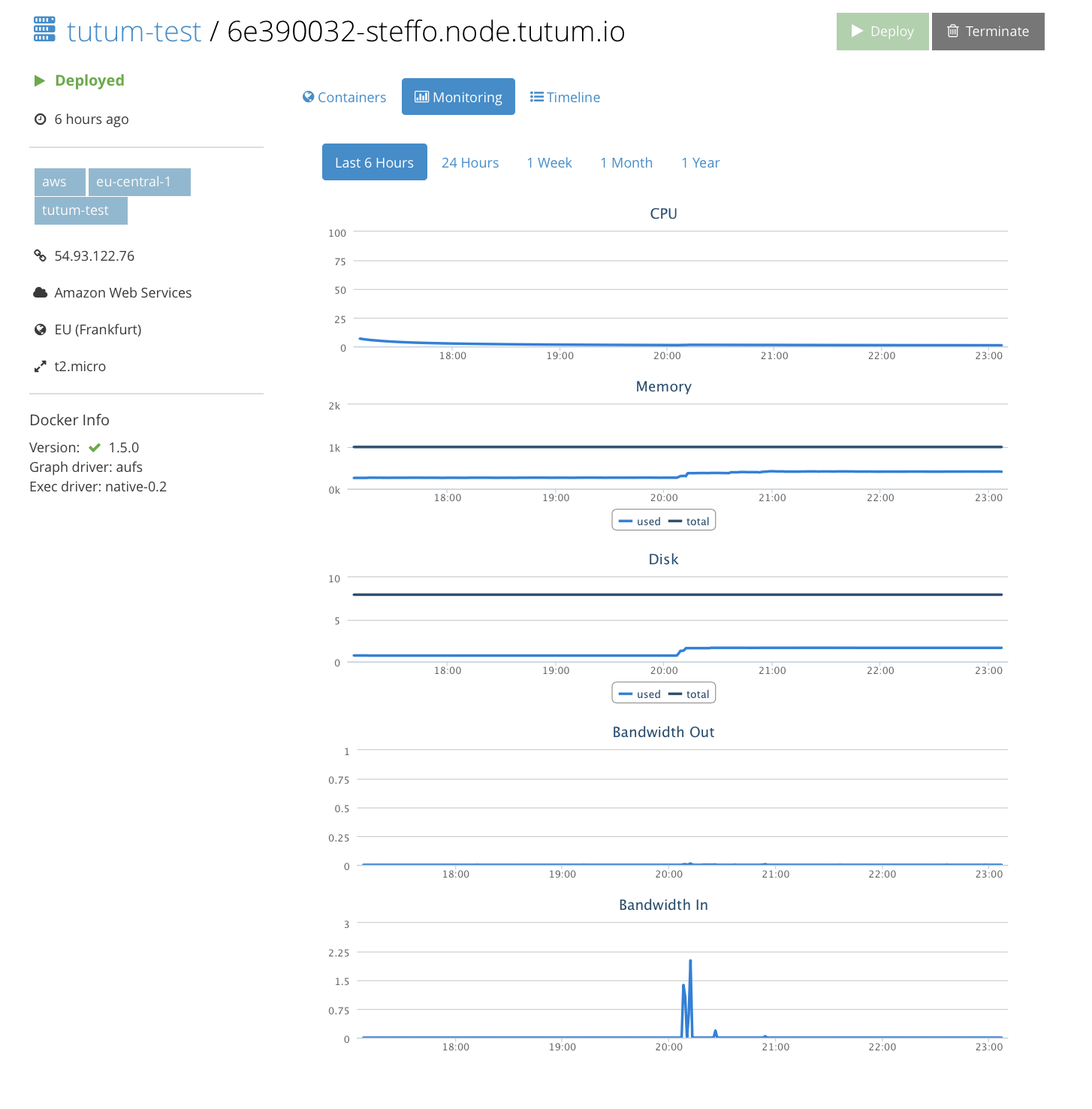 Creating a new node
You’ll need a node to deploy containers on it. In the node view you see two big green buttons. One states: “Launch new node cluster”. This will bring up a form with currently four popular providers Amazon, Digital Ocean, Microsoft Azure and Softlayer. If you have linked your account(s) in the settings you can select that provider from a dropdown box. It only takes a few clicks to get a node up and running. In fact you create a node cluster, which allows you to easily scale up or down by adding or removing nodes from the cluster.
You also have an option to ‘Bring you own node’. This allows you to add your own Ubuntu Linux systems as nodes to Tutum. You need to install an agent onto your system and open up a firewall port to make your node available to Tutum. Again very easy and straight forward.
Creating a new service
Once you have created a node, you maybe want to do something with it. Tumtum provides jumpstart images with popular types of services for storage, cacheing, queueing and more, providing for example MongoDB, Elasticsearch or Tomcat. Using a wizard it takes only four steps to get a particular service up and running.
Besides the jumpstart images that Tutum provides, you can also search public repositories for your image of choice. Eventually you would like to have your own images running your homegrown software. You can upload your image to a Tutum private registry. You can either pull it from Docker Hub or upload your local images directly to Tutum.
Automating
We all know real (wo)men (and automated processes) don’t use GUI’s. Tutum provides a nice and extensive command line interface for both Linux and Mac. I installed it using brew on my MBP and seconds later I was logged in and doing all kinds of cool stuff with the command line.

The cli is actually doing rest calls, so you can skip the cli all together and talk HTTP directly to a REST API, or if it pleases you, you can use the python API to create scripts that are actually maintainable. You can pretty much automate all management of your nodes, containers, and services using the API, which is a must have in this era of continuous everything.
A simple deployment example
So let’s say we’ve build a new version of our software on our build server. Now we want to get this software deployed to do some integration testing, or if you feeling lucky just drop it straight into production.
build the docker image
tutum build -t test/myimage .
upload the image to Tutum registry
tutum image push <image_id>
create the service
tutum service create <image_id>
run it on a node
tutum service run -p <port> -n <name> <image_id>
That’s it. Of course there are lots of options to play with, for example deployment strategy, set memory, auto starting etc. But the above steps are enough to get your image build, deployed and run. Most time I had to spend was waiting while uploading my image using the flaky-but-expensive hotel wifi.
Conclusion for now
Tutum is clean, simple and just works. I’m impressed with ease and speed you can get your containers up and running. It takes only minutes to get from zero to running using the jumpstart services, or even your own containers. Although they still call it beta, everything I did just worked, and without the need to read through lots of complex documentation. The web interface is self explanatory and the REST API or cli provides everything you need to integrate Tutum in your build pipeline, so you can get your new features in production with automation speed.
I’m wondering how challenging managing would be at a scale of hundreds of nodes and even more containers, when using the web interface. You’d need a meta-overview or aggregate view or something. But then again, you have a very nice API to