Multimedia Communication: When to use screencasts/movies in demos.

For the last 9 months I’ve been working as a team member of Xebialabs on a product called Deployit. The product automates deployments of applications. As any Xebia team we use SCRUM for our development. Now at the end of our two week sprint we give a demo to the product owner and stakeholders of what we’ve been building.
We demo deploying applications onto a variety of Application Servers and other Middleware, like for instance WebSphere/Oracle-Bea Application Server/Portal, MQSeries, HTTP Servers and so on… Sometimes demo-ing a story, like deploy application A to application server B can take 10 to 15 minutes. That means, for an hour of demo time we can not show every user story that we finished in our sprint. So we only show the important ones. But what happens when demoing a story can take up to 45 minutes? How can can we cram multiple finished stories into the hour?

Multimedia to the rescue! Whenever we have a story that takes a lot of time to demo, we record a screencast when we are preparing, cut out the long waiting parts and then show it as a movie. Please note; we only do this when we demo a user story where we have to wait for a long time. It also is important to tell the product owner and stakeholders that you are playing a movie that normally takes 45 minutes but has been cut down to 2.
Two months ago we worked on WebSphere Portal deployments. The story; Deploy Portlets, Update Skins-Themes-and-Screens and create Virtual Portal was implemented and added to the Fitnesse test suite. To prepare for the demo, I ran the Portal deployment test case. Fitnesse quickly entered all the necessary data into Deployit. (1 second) Then it hit the “Deploy” button and we were off! (sub 1 second). My Macbook Pro’s CPU fans started spinning up because the deployment to portal was taking place and after 45 minutes it was done! Before i started the test, i recorded my desktop/screen with my favorite screencast software ScreenFlow. After the test ran, i edited all the parts out of the recording where there was no activity on the screen. That left me with a screencast/recorded movie of about 2 minutes! Perfectly demo-able! 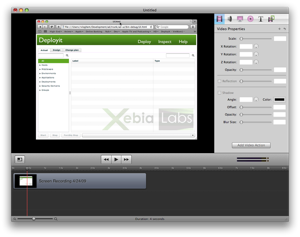 by Robert van Loghem
I'm always interested in the latest and greatest when it comes to; communication, infrastructure, user experience and coming up with some crazy creative solution which might seem as a weird combination ;) I use and spread the word about multimedia (podcasts, vodcasts, movies, comics) to effectively communicate concepts, ideas, documentation, past experiences and so on. Furthermore i am heavy into infrastructure but then the middleware part, like HTTP servers, Application Servers, Messaging, Virtualization, etc... I get really enthousiastic if the infrastructure is clustered, highly available and is critical to doing business! I also like to do development and thus "i eat my own dogfood".
Login
0 Comments
Inline Feedbacks
View all comments