My colleague Robert van Loghem and I have been blogging about Java EE deployment the last few weeks. And that is not without a reason; we have built Deployit, a product to automate Java EE deployments. We’ve already mentioned it before in some of our podcasts and blogs, so now might be a good time to explain some of the concepts behind our product.

The problem our product is addressing is that Java EE deployments are tedious and unpredictable affairs that can also be very dependent on specific knowledge. The guys at ZeroTurnaround conducted a survey on Java EE redeployment and restart times. The results are interesting, especially when you consider that these times are for a redeployment in a development environment. Consider the challenges of doing this in a production environment with an application server cluster, multiple web servers, and databases and so forth that all need to be configured and restarted using a full redeployment scenario. I believe that the only way to do deploy applicaitons in a reliable and efficient manner is to automate this task. Something that IT analysts such as Gartner and Forrester also see as an emerging and hot topic.

In our experiences dealing with this issue, we’ve found that middleware environments can be so complex that nobody has the complete picture. It’s like the story of the blind men and the elephant where a number of blind men touch and elephant to find out what an elephant is like. One touches the trunk, the other the tail and another one a tusk. Each one of them knows a small part of the elephant but none of them has the complex picture of the elephant. For middleware environments this means that the OS guys can tell you about all the boxen in the netwerk, the Java EE guys about the application servers and the applications running on them, the DBAs about all the databases and the schemas that are around, while the network guys know what is connected to what. Without proper configuration management nobody can get the complete picture without consulting with all of these groups. Because knowing what is already there and then figuring out what to change to get an application into production is such a big part of deployment, I believe that you cannot effectively automate deployments without having proper configuration management in place. That is why our deployment automation product Deployit combines these two aspects.
So how does Deployit do that? Let me explain by going over each of the three components involved: 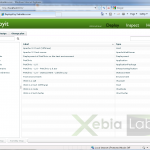 The first component of Deployit you will meet when you start up its Flex user interface is its configuration management database (CMDB). The CMDB holds all the information about the middleware environment. In the picture to the right (you can click it to enlarge it) you can see a Deployit CMDB for a very simple demo environment. Each line represents a configuration item (CI) and the CMDB can be summarized as follows: 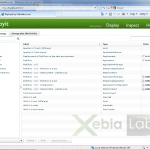 The CMDB in Deployit gives you an overview of the actual state of your environment. But how does that help you deploy anything? Well, for that you switch to the Design tab. As an example let’s pick the scenario where we want to upgrade the deployed application. As mentioned before, this is actually a scenario that is way more common than the initial deployment.
So we switch to the Design tab and import v2.0 of our application into the CMDB. And then we modify the deployment CI to reflect that we want v2.0 to be deployed in our test environment. This declaratively tells Deployit that we want to perform an upgrade and Deployit’s change resolution engine will define the steps that need to be executed. The nice thing about this is that anybody can perform a deployment because it is as simple as modifying the deployment in the user interface. The same thing goes for middleware configuration actions such as adding a cluster member, modifying a datasource, etc. 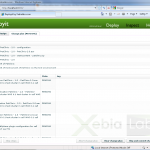 To find out what steps the change resolution engine has determined need to be taken, we switch to the Changeplan tab in the user interface, where we will see a list of changes (to summarize the changes made) and the list of steps to be taken: 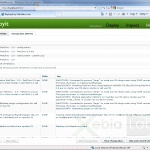 When we have made all the changes we want to make and when we have reviewed the steps to be to our liking we press the “Deploy” button in the top button bar to execute the steps. Deployit’s execution engine will log in to the target machines and execute the steps. Once all the steps have been executed, Deployit will update the CMDB to reflect the changes made: v2.0 of the PetClinic application will now be visible in the actual tab and the “Deployment of PetClinic on the test environment” CI will show that PetClinic v2.0 has been deployed on the test environment.
Deployit’s execution engine does not require any agents to be installed on the target system. It uses SSH to log in to the target machines and there it will use the native interfaces of the target middleware (e.g. wsadmin or WLST) to perform the necessary work.

There are quite a number of advantages to integrating configuration management with deployment automation:

This is a very brief summary of how Deployit works. In later blogs I will explain the concepts behind our product.