Looking at the configuration of the current sprint related work item queries, that are delivered by default, you will find “Scrum/Release 1/Sprint 1” as the default value for the Iteration Path clause in the different Work Item Query definitions.

The Agile process template configuration is slightly different. Looking at the default iteration path structure, note that the different iterations are created directly under the root node.

Looking at the current iteration related queries that are created by default, you will find “AgileIteration 1” as the default value for the Iteration Path clause in the different Work Item Query definitions, as shown in the figure below.

Even worse is the effort that is needed to maintain the current iteration related queries of the Agile process template. Instead of having at least 5 work item queries, you have to change at least 10 queries each time the current iteration changes, as shown in the table below. Hmmm, not as efficient as we would think upfront.. But how to make this eassier?

Solution 1 – Implementing a placeholder node in the iteration path for the current sprint/iteration (prior to VS2013.5)

The first solution I have, is relevant for all versions of Visual Studio prior to VS2013 Update 5. To implement this solution you have to execute the following steps: 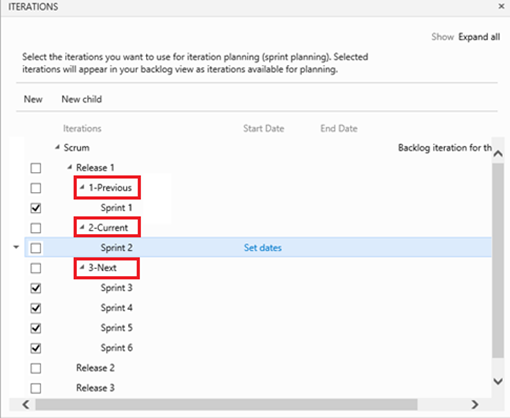 Solution 2 – Making use of the @CurrentIteration query token (since VS2013.5)

The second solution is based on a new query token which is introduced since VS 2013 Update 5; @CurrentIteration. Once upgraded to VS2013.5 or VS2015 (including your TFS server), this new query token returns the current iteration based on today’s date and can be used as value in the Iteration Path clause.

The @CurrentIteration option initially looked like a clean and elegant solution, until I discovered that it prevents query results being exported to Excel:

I’ve therefore reverted to using your first solution, for which thanks!

Do you have any suggestions on how to filter against the start date of the current iteration? I would like to identify all items created after iteration start. We are having problems with additional tasks being identified as we work through the iteration and I want to highlight the amount of work added during the sprint to make us more aware of this.