How can you make your builds complete faster so that you can build more often and have earlier feedback?
You could do this by caching your node modules. I’ll explain how to do this within Azure DevOps.

Creating a build pipeline in Azure DevOps for a Node.js based application is straightforward. You only need a few lines of code to achieve this. At a later point you may add additional tasks, such as linting and running tests. As a result, the pipeline will take longer to complete with each added task. Let’s start speeding things up using caching.

You can find the repository for node modules caching in Azure DevOps here.

The first step is to install all dependencies. The second step needs these dependencies in order to start the build. In this example, I used an Angular application. However, any application that needs NPM packages will profit from the caching solution. The node modules folder is 257MB.

The results are as follows:

A build time of under a minute is not bad at all, but we can do better.

In Azure Devops when editing the build definition, the tasks will show in the right pane: 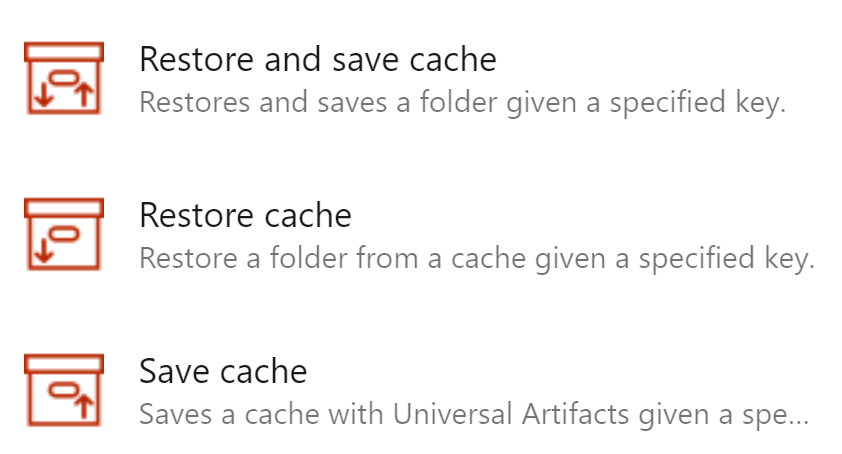 You can find more on these tasks here. 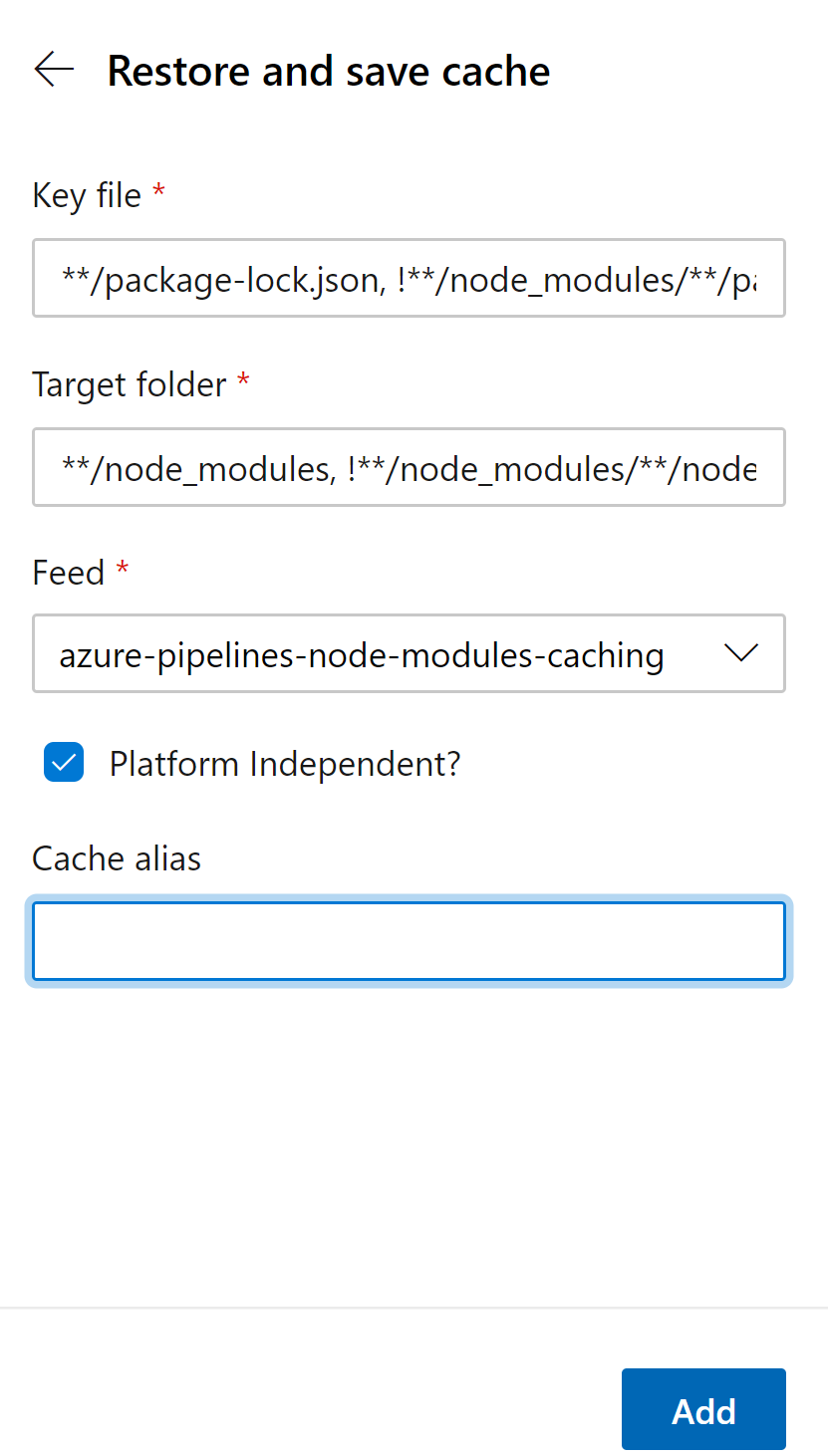 You need cache alias only when your build pipeline needs to restore and save multiple caches and uses optimistic caching. For node modules you can tick the platform independent checkbox. In this way, the build agent will use the same cache independent of the agent’s OS.

The generated YAML looks as follows:

After committing the YAML file and waiting for the build to complete, let’s look at the results:

This run takes longer, because the cache needs to be saved. Azure artifacts shows the cache feed:

Let’s run the pipeline again and check the results:

This means the “NPM Install Dependencies” task will be skipped when the node modules are in the cache.
Let’s look at the result:

We just decreased the build time by 10 seconds.
Depending on the amount of tasks in your build pipeline this decrease can vary. I managed to improve the build time 5m 29s to 3m 22s minutes at my client.

Node modules caching in Azure DevOps will reduce your pipeline run duration when your solution relies on node packages. You can further reduce this run duration by adding optimistic caching. When you introduce parallel jobs, node module caching could increase the effect of faster builds. In my opinion, you should start doing node module caching when creating a pipeline. I believe the performance benefits will outweigh the time needed to implement this.

Let me know what you think

Any comments are more than welcome! You can add those in the comments section below or drop me a message through LinkedIn.

Why Integration Tests won’t save you… or your software

Gists are no longer working, could you update them?

Hi Michal, sorry for the late reply. There was an issue with the blog platform in which I could not reply to comments. The Gists have been updated.

The biggest question: how to and when to invalidate the cache?

Hi Markus,
Yes, the behavior in this blog post is when the package lock file changes. This happens when you update, remove or add a package. You can toggle this with the “Key file” field.

Hi,
Sorry, but the steps mentioned aren’t working. Is it possible to validate it?
Thank you for your time.

I tried to reach out to you some time ago on Github. Let me know if you still have problems. About three weeks ago I verified my solution and everything was working as it should.

Extensions also aren’t working.
Also, I tried to use the official [caching approach](https://github.com/microsoft/azure-pipelines-yaml/blob/master/design/pipeline-caching.md), but didn’t work as well.
Any luck, let me know.

Node_modules can be OS-specific, if I remember correctly e.g node-gyp compiles during yarn install

Hi Asorak,
thanks for the addition. I checked this and found out that the node_modules folder is both the same on UNIX and Windows based machines. Maybe you could elaborate on a specific scenario? Thank you.


Any help would be appreciated!

Hi I am trying to cache the modules but it always post-job and its not updated feed.

– script: |
npm ci
displayName: Install dependencies only if there is no cache available
condition: ne(variables[‘CacheRestored’], ‘true’)

Hi Srinivas,
Thanks for your message and for sharing your YAML code. I tried to replicate the issue and the first time I get an error In the restore/save node modules step: ##[warning]Error: Failed request: (503).
It also skips the post job like you mentioned.
However, when I run it again, it succeeds and doesn’t skip the post job anymore.
Another cause could be a wrong feedId. When this happens it will always skip the post job. You can find the feedId by adding the “Restore and save cache” task through the Azure DevOps UI.
Hope this helps.

I am using the Restore and save Cache task before npm install task in my Classic UI editor build pipeline.

I have provided same key files and target folder like you but after the build is executed i see a warning in the logs of estore and save Cache task like below,

And also there is no cache saved in my artifacts feed.

What am I missing?