Anatomy of a Looper

There’s an intersting low-level class in the Android SDK called Looper. Each app has at least one, because it powers the UI Thread. You can create Android apps perfectly fine without ever using Looper yourself, but it’s an interesting thing, so let’s take a look under the bonnet. 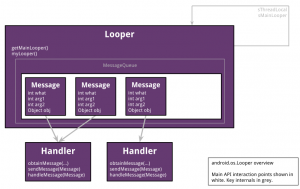 The visible building blocks are Looper, Handler and Message. Behind the scenes, there’s MessageQueue. Each Looper is tied to a single Thread, and each Thread has at most one Looper. The Looper is accessed primarily through the Handler class.

Handler has the methods through which you obtain message instances and submit them to the message queue of the associated looper. Once your message is at the front of the queue, the Handler is also the object to process that message. You can implement the message processing behaviour either by subclassing Handler and overriding the handleMessage(..) method, or by creating the Handler with an implementation of the Handler.Callback interface.

Messages have five public fields. The int what defines the message type. It allows a single Handler (or Handler Callback) to handle multiple kinds of messages using a switch construct. The two ints arg1 and arg2 and the object obj are free format arguments that you can use however you see fit. The replyTo field is outside the scope of this blog post.

Java 1.5 introduced the util.concurrent package and, with it, the Executor framework. This framework is included in the Android SDK and the Looper is similar in purpose to a SingleThreadExcecutor, albeit clearly less versatile: you can’t use Callable‘s and Futures, you can’t change your mind about the chosen ExecutorService implementation or tune the queue length.

The reason is that Looper has a different performance profile. Recall that the UI thread is powered by a Looper. What you can’t tell from the diagram shown earlier is that the Message objects are kept in an object pool and used over and over. This means that, if you choose the message payload right, a looper can run indefinitely without creating garbage collector load.

The gold standard for a UI is to refresh sixty times per second. This gives the user the smoothest scrolling. Had the UI Thread been built on top of an executor service, the garbage collector load would have made such a refresh rate impossible and the user wouldn’t have been scrolling smoothly for very far.

Putting Looper to use

The most common use of the Looper API is as a means to hop onto the main thread from a background thread. This is how the onProgress() and onPostExecute() methods of AsyncTask are implemented.

Incidentally, if you ever need to check whether the current thread is the Main thread, simly test ( Looper.myLooper() == Looper.getMainLooper() ). This can be a useful complement to StrictMode.

Using your own Looper

Besides the main looper, it’s perfectly possible to create your own Looper and do message processing in a background thread. By nature, this is a low-level construct and not all apps need it. Peripheral I/O is a good candidate for handling in this manner, for example, talking Bluetooth to an Arduino.

To begin using a looper, you need to call Looper.prepare() and Looper.loop() on the Thread that will do the looping. The call to loop() doesn’t return; from the moment you call this method, your thread is processing messages until the quit() method is called on its Looper.

The SDK includes HandlerThread to take the boiler plate off your hands and make all this a bit easier.

Very useful article. Thank you! I wonder why all this information is missing in the Android documentation itself, which does not even mention the purpose of the Looper class (avoiding garbage collector load).

What happens when two handlers uses the same looper ? How the messages are dispatched ?

@Jins Each Message is tied to a Handler. The messages are processed in queue order, each by its own handler.