Web apps and Api apps  in Azure are great, however when using them you have to agree to have them connected to the internet directly without the possibility of adding a WAF or other kind of additional protection (next to the default Azure line of defense). When you want to add something like that you have to add an Internal Application Service Environment to host your apps so you can control the network access to these apps.

In our case adding an ASE was fine except that we have a scenario where we have quite a lot of subscriptions and most of them are quite small running only a couple of apps in them. Adding an ASE for each subscription was going to become a bit to costly so we came up with the idea of creating 1 central subscription called “Shared Services” where we would host things that multiple departments could share such as WAF functionality, the VNet, the Express route and also the ASE.

After creating the design we ran in to some problems actually implementing it because we weren’t able to select an ASE in another subscription which was part of the same enterprise agreement when creating an App Service Plan or Web App in Azure.  After checking it seems that this is a limitation of the Azure Portal and we had to use ARM templates to create our web app. This didn’t matter because we were planning on using ARM templates anyway. so we started to give it a try. 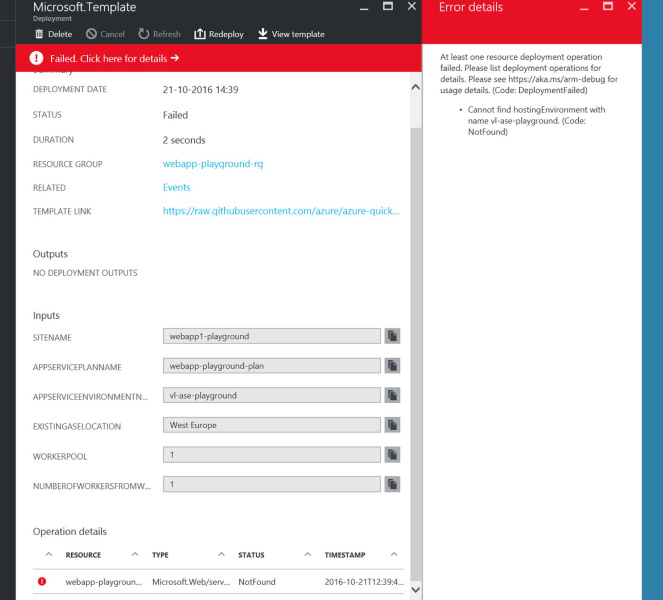 After that we tried to remove the “HostingEnvironment” property and only set the “HostingEnvironmentID” to directly link to the full resourceID of our ASE. this did get our hopes up because we were able to deploy the web app, however it was running on the P1’s that were part of the workerpool of our internal ASE but it still had a public dns name and was accessible from the internet. I guess we weren’t supposed to created it this way. so i asked help from the Microsoft product team and they pointed me to the right correction.

It all boils down to using a newer API version of the Web App and App Service Plan ARM template API than that are generated in visual studio when building ARM templates. we had to use “apiVersion“: “2015-08-01“

in here we can set the “hostingEnvironmentProfile” to the full resourceID of our ASE for both the App Service Plan as the Web App. Next to that we also have to set the sku to the correct worker pool within our ASE.

Now when we try to deploy our ARM template it will actually create an App Service Plan and Web App in another subscription than where our ASE is running. Nice!

Hopefully this post will help you when you run in to the same problems i did when trying to deploy web apps in an ASE using ARM templates.

The post Adding an Azure web app to an Application Service Environment running in another subscription appeared first on Mobile First Cloud First.