Whether you’re a developer or not, every iPhone user has experienced the case where he or she tries to tap a button (with an image and nothing happens. Most likely because the user missed the button and pressed next to it. And that’s usually not the fault of the user, but the fault of the developer/designer because the button is too small. The best solution is to have bigger icons (we’re only talking about image buttons, no text only buttons) so it’s easier for the user to tap. But sometimes you (or your designer) just wants to use a small icon, because it simply looks better. What do you do then?

For buttons with normal images this is very easy. Just make the button bigger. However, for buttons that draw themselves using PaintCode, this is slightly harder. In this blogpost I’ll explain why and show two different ways to tackle this problem.

I will not go into the basics of PaintCode. If you’re new to PaintCode have a look at their website or go to Freek Wielstra’s blogpost Working With PaintCode And Interface Builder In XCode. I will be using the examples of his post as basis for the examples here so it’s good to read his post first (though not strictly necessary).

To get a better understanding of how a UIButton with an image differs from a UIButton drawn with PaintCode, I will first show what a non-PaintCode button would look like. Below we have a PNG image of 25 by 19 pixels (for non-Retina). Apple recommends buttons to be 44 by 44 points so we increase the size of the button. The button has a gray background and we can see that the image stays the original size and is nicely in the center while the touch target becomes big enough for the user to easily tap it.

The reason it behaves like this is because of the Control settings in the Attribute Inspector. We could let the content align different or even make it stretch. But stretching this would be a bad idea since it’s not a vector image and it would look pixelated.

That’s why we love PaintCode graphics. They can scale to any size so we can use the same graphic in different places and at different screen scales (non-retina, retina @2x and iPhone 6 plus which uses @3x). But what if we don’t want the graphic to scale of to the entire size of the button like above?

A bad solution would be not to use a frame in PaintCode. Yes, the image will stay the size you gave it when you put it in a button, but it will be left-top aligned. Also you won’t be able to use it anywhere else.

If you are really sure that you will never use the image anywhere else than on your button you can group your vector graphic and tell it to have flexible margins within the frame and have a fixed width and height. Using the email icon from Freek Wielstra this will look something like this: 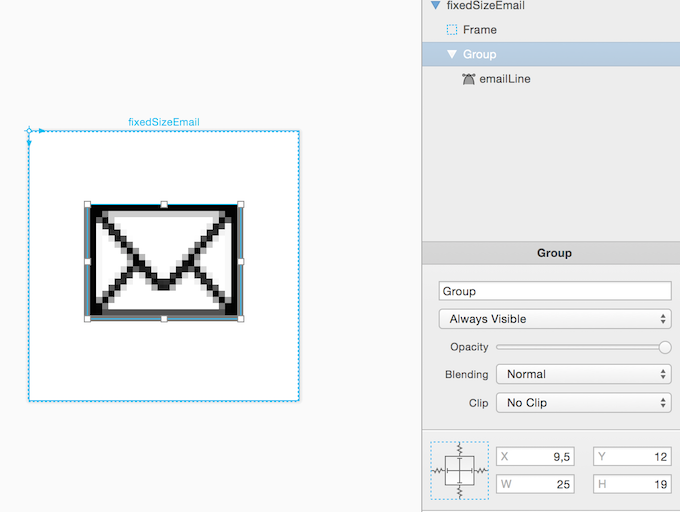 You can verify that this works by changing the size of the frame. The email icon should always stay in the center both horizontal and vertical and it should stay the same size. The same will happen if you use this in a custom UIButton.

Now let’s have a look at a better solution that will allow us to reuse the graphic at different sizes and have some padding around it in a button. It’s easier than you might expect and it follows the actual rules of a UIButton. The UIButton class has a property named contentEdgeInsets with the following description: “The inset or outset margins for the rectangle surrounding all of the button’s content.” That sounds exactly like what we need. Our PaintCode graphics are the content of the buttons right? Unfortunately it’s not treated as such since we are doing the drawing ourselves which does not adhere to that property. However we can very easily make it adhere to it:

And that’s really all there is to it. Just make sure to put a frame around your graphics in PaintCode and make it stretch to all sides of the frame. Now you can specify the content insets of your buttons in Interface Builder and you icon will have padding around it.

Working with PaintCode and Interface Builder in XCode